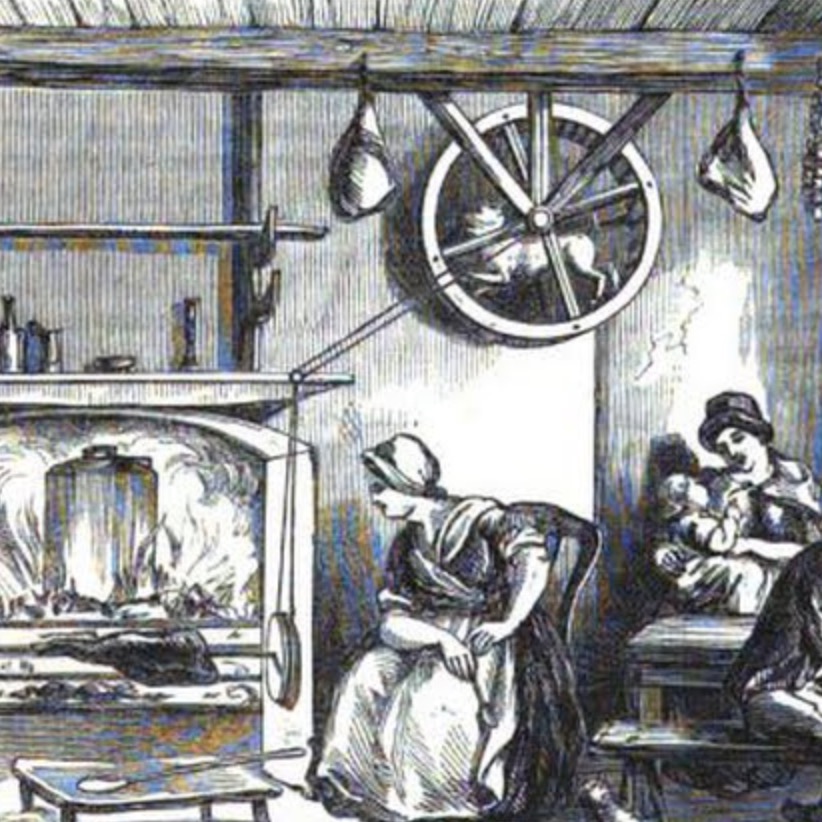 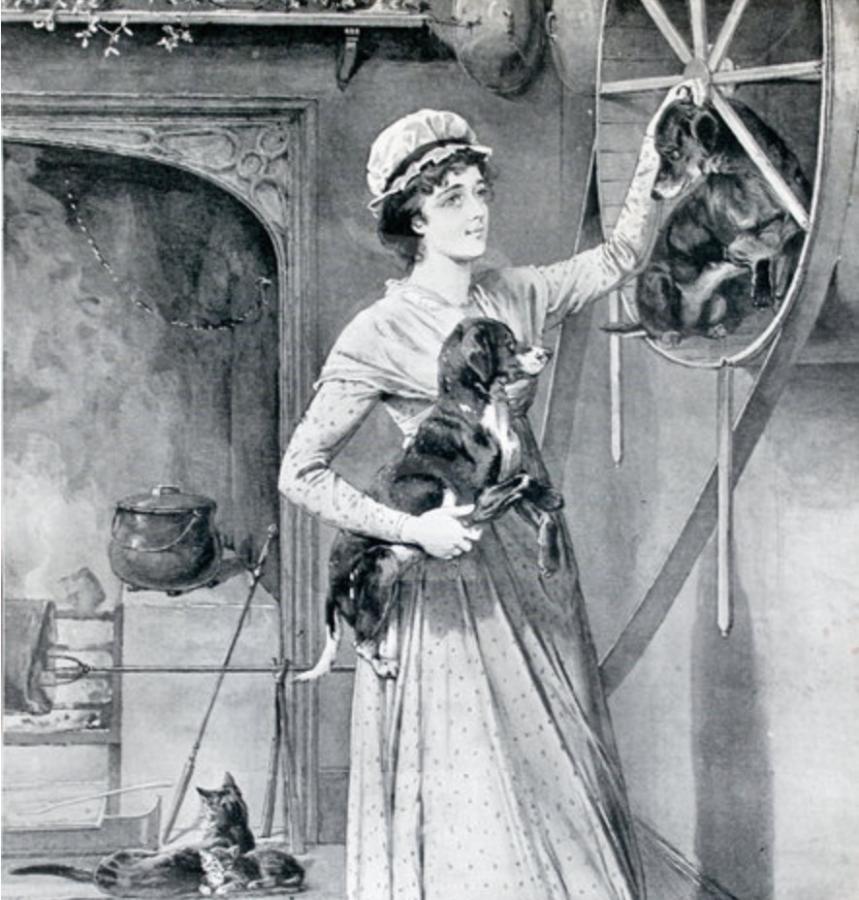 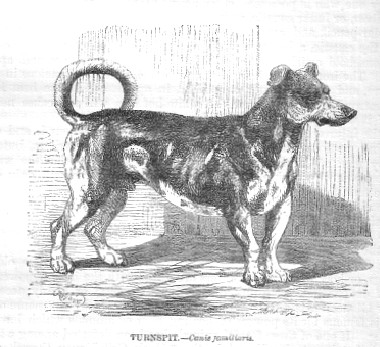 London South West, UK - Cooking large joints of meat on spits in front of wood or turf fires set on a bed of ashes directly on hearths, or above on a downhearth grate, vexed households from Elizabethan to Victorian times. From Georgian times spinning dangle jacks, mechanical hot-air driven smoke jacks and clockwork or bottlejacks would cope with smaller roasts, but not with larger ones.

Animal help came from two or more turnspit dogs who took it in turns to work a treadmill with reduction gearing to slowly turn a spit in the kitchens of affluent households.

In 1650, Richard Brome wrote <i>A jovial Crew or The Merry Beggars</i> in which Randal says, "I myself was but a silly lad when I came first, a poor turn-spit boy. Gentlemen had no whirling jacks then, to cozen poor people of meat. And I have now, without boast, 40 shillings in my purse …"

James I decreed that servants including no turnbroche (pronounced turnbroach) in his employ could marry "upon pain of loss of their general place". This basic method was a tiresome and uncomfortable job due to the overpowering heat of the fire. The turnbroche or turnspit was eventually replaced by dogs and even geese in treadmills.

In the sixteenth century, Doctor Caius, founder of Caius College , Cambridge described the turnspit dog, a breed now extinct. 'There is comprehended under the curs of the coarsest kind a certain dog in kitchen service excellent. For when any meat is to be roasted, they go into a wheel, which they turning about with the weight of their bodies, so diligently look to their business, that no drudge nor scullion can do the feat more cunningly.'

Turnspit dogs frequently hid or ran away on roasting days. Geese were said to be able to keep the spits turning for up to twelve hours at a time. Unsurprisingly mechanisms were marketed to replace animal and human effort. The town of Dax in France manufactured springjacks on an enormous scale.

Count Rumford, aka Benjamin Thompson (1753-1814), who believed in ovens to cook meat, wrote, 'that much less than one thousandth part of the fuel that is necessary to be burned in an open chimney fireplace in order to cause a smoke jack to turn a loaded spit, would be sufficient to make the spit go round, were the force evolved from the combustion of the fuel, if it were properly directed through the medium of a steam-engine.' In the nineteenth century, the British navy took up this idea and some ships were equipped with steam-driven spits.

The most popular method of roasting meat in England during the nineteenth century was the bottlejack, a small device that used a verge escapement to turn the joint or bird through the vertical axis - a springjack wound up with a key. Bottlejacks were sometimes hung inside a curved tinplate screen or hastener usually with a cast iron flywheel hung with four small hooks from which fat could be suspended, so the joint could be basted automatically. Bottle jacks were still being manufactured in the 1930's.

If you could not afford a bottlejack, you could roast meat by simply hanging it from the mantelpiece on a length of string or with a cheap weighted device called a danglespit or danglejack, which would be encouraged to rotate by flicking.

In Chamber's <i>Book of Days</i> of 1863 in the early 1800s recollected the operation of a turnspit dog in the house of a worthy Welsh clergyman in Worcestershire whose turnspit dogs were 'long bodied, crook legged and ugly dogs with a suspicious unhappy look about them, as if they were weary of the task they had to do and expected every moment to be seized upon to perform it'. The dogs attitude may not be surprising since it had to work the wheel for three hours for a large joint to be properly roasted.