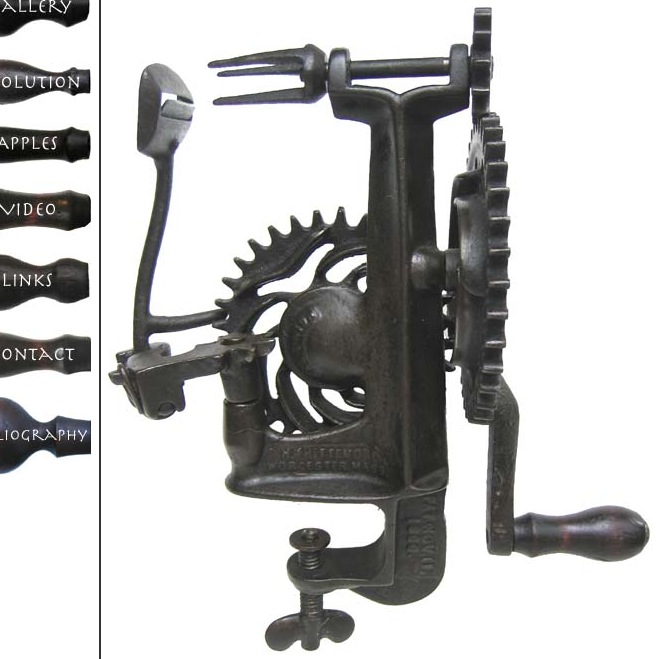 Colorado, USA - Mike Viney is a collector of American mechanical apple peelers, or apple parers as he prefers to call them. His website does what it says on the tin, with history, mechanics, photo galleries and even includes videos of 22 nineteenth century cast iron parers. Mr. Viney has also created his own terminology to describe some of the gears for the four basic systems - turntable, return, arc and lathe - and how they evolved through time.

Apples were introduced by colonists to America and are now its most important crop. Honey bees were also introduced to pollinate them. Mr Viney writes that John Chapman, aka Johnny Appleseed, established orchards and sold trees to settlers. 'Hard and soft cider was a critical beverage for Europeans and early American colonists. Unpasteurized cider not only provides vitamin C, the fermentation process creates vitamin B12. The alcohol and tannins in cider stop bacterial growth, making it all the more important when water sources are unreliable.'

He also writes, 'Apple parers provide a wonderful learning tool for exploring gears. Gears are used in apple parers to provide speed advantage, mechanical advantage or to change the direction of motion.'

More than 100 U.S. patents were granted for appler parers between 1850 to 1890. 'Crank an antique apple parer, take in its integrated moving parts and witness the solution to an engineering puzzle made possible by linking the minds of human inventors through time.'

What Mike Viney does not know about apple parers is probably not worth knowing - although one wonders whether he is familiar with the connection between apples and stairs. Er probably, yes. In any case he lists publications and links to, for example, the International Society of Apple Parer Enthusiasts.