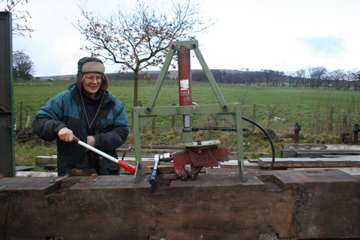 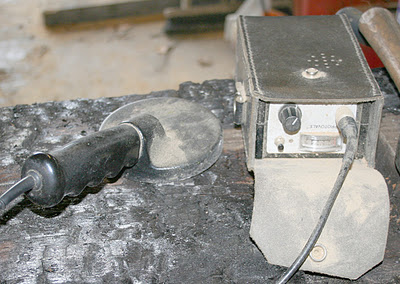 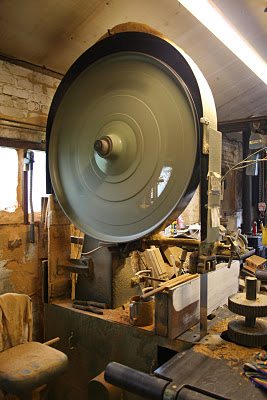 Lancashire, UK - "TWENTY-THREE year's ago I went to a salvage yard for a piece of old oak for a mantelpiece and thought, this guy is making a living by not being helpful and polite - I can do that. At the same time I was using a hand-saw to rip beams down and someone said get a table saw. I went to look at one which turned out to be a Wadkin 36ins circular dated - 1 June 1951 - my birthday. It was a beautifully well-made machine," Nick Gordon said in his stream of consciousness manner of speaking. It seemed like destiny, so he bought it on the spot.

Nick left school to start a career in the family scrap metal business in Westhoughton, but eventually decided to give flagging a go. This ended with him sending reclaimed flagstones to Buckingham Palace, the Tower of London and the Imperial War Museum. Fiona Gordon also lived locally. Their paths probably crossed at a very young age - neither seemed too sure - and they got married. The flagstone business had to stop when they lost their premises.

So they moved on to reclaimed timber, based at their farmhouse nestling in the countryside above Bolton. Nick put an ad in the Farmer's Guardian. The orders started coming in, mainly for pine flooring and cutting lists. His first big order came after the 1987 storms from a boat repairer. Nick already had good contacts with the demolition trade from his scrap and flagstone days so supply was not a big issue.

Nick Gordon's skill for mechanics soon came in handy and he started acquiring, commissioning and adapting machinery suited to the task of ripping beams, mainly pitch pine, into boards and sections. Fiona was, and still is, his labourer as well as his taskmaster, dealing with the phone and orders. One can be justly envious of their blissful life in a rural idyll with an old farmhouse land and outbuildings, poultry and dog running around - their kids have grown up and left now - and no employees to worry about.

The tools the Gordons have bought and developed include a bolt-puller, power-adze, bandsaw converted to run hydraulically using a six litre lorry engine, a Farm 2000 wood waste boiler in which they burn sawdust collected by their home-made extraction system, and a circular saw with Nick's unique home-made blade capable of chomping its way through a thousand six-inch steel nails. They use a Protovale Imp to search for nails, bolts and screws which Nick says will find things as small as a carpet staple. They also steam clean the beams to get rid of grit and reduce wear on the saws and planer.

The wood they buy is pitch pine or yellow pine, taken out of buildings locally and further afield, much of which is first growth forest timber of North America and the Baltic logged in Victorian times. As if to prove its pedigree, among the embedded objects found by the Gordon's, usually wire fencing and the occasional lead bullet, was an iron tomahawk-head which they found buried deep in a pine beam from the old Warburton's Victorian bakery building. Iron tomahawk heads were first taken to North America by the French in the late eighteenth century to trade with the indigenous population, and would have been the prized possession of an Indian brave who would rarely threw a tomahawk in anger unless in serious trouble and then would normally unerringly hit the target. What a story it could tell!

When converting the beams Nick will start with boards then, if the beam is good, take out the biggest sections, and then go back to floorboards again. For clean wood he uses a 1946 Robinson band resaw, which he describes as a lovely machine, the most powerful saw of its size in England, which will cut a 12in square beam at 3 1/2 feet per second. He converted it to run hydraulically on an old Ford Cargo six litre engine (petrol I guess). He also has a Wadkins 36in circular saw and blades, including one he has made especially for ripping through six inch nails, the result of a job he got from Michael Aspel who wanted extra naily wood for one of the floors in his house. Conspicuous salvage that. The Wadkin's saw blades date from early plate saws that are set traditionally, through to later complex inserted tooth tungsten-tipped saws. He changes them according to the number of residual nails and the amount of resin in the wood. There is a also a Dominion four-cutter for planer thicknessing.

Sawdust is collected in a home-made cyclone extractor and is then burnt, along with scrap off-cuts, in their Farm 2000 wood waste burner, which heats their house and hot water. Chickens forage for woodlice. Nothing goes to waste.

After converting the wood, it is stacked in a kiln made from the body of a 20ft lorry refrigeration container, containing a dehumidifier and a 3kw fan heater. "It is so well insulated that the fan heater is hardly needed," Nick said. The finished wood is kept in a barn, every piece of dimension timber marked with its length width and breadth. "Fiona deals with cutting list orders. She seems to be able to complete a £10,000 order without making a dent on our stock. I go in and have a look at the pile and it doesn't look any different," said Nick. "That said we are always after yellow pine and pitch pine. The trouble these days is that too many demolition contractors are shredding reclaimable timber on site or smashing it in the process of demolition. Buildings are not being sympathetically destroyed like they were a few years back."

He describes pitch pine as Pinus palustris - longleaf pine but accepts that other heavy pines could also lay claim to being pitch. (See Salvo Guide 2000 p209-212 for Salvo's story of pitch pine which names a dozen species that have been called pitch over the years.) He has a love hate relationship with pitch. It is a strongly figured dense durable wood which is sought-after by customers but it is a pig to work. "It is the worst stuff to cut," he sighs. On the subject of pine species, I mentioned that the only UK native pine, Pinus sylvestris Scots Pine, can grow dense enough to be considered a pitch pine. Nick said that at a castle in Elgin they had to supply floorboards to match the locally-grown originals which must have been cut from Scots pine. "They looked exactly like pitch pine, so I guess slow-growing Scots pine could be dense and pitchy enough to be classified as pitch pine," he said.